This report comes from the Ghana News Agency… Accra, Oct. 31, GNA – All God’s Children International, (AGCI) Ghana, on Thursday launched an Orphan Week, aimed at creating awareness and sensitizing the public on the need to support orphans and vulnerable children in society.

The week, being held in collaboration with the World Without Orphans (WWO) at the Grace Chapel International, Kaneshie, began on Monday, October 27.

Activities for the occasion include visits to orphanages, discussions with stakeholders including the Social Welfare Department, to be eventually crowned with an initiative christened “Orphan Sunday,” to provide spiritual support to orphans across the country. 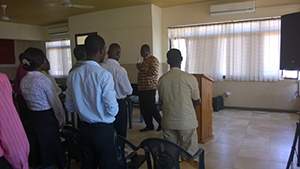 Speaking at the launch, Mr. Fred Sakyi Boafo, National Orphan and Vulnerable Children Coordinator, at the Department of Social Welfare, noted that Ghana was the first country to ratify the United Nations Convention on the Rights of Children in 1990, which was followed by a provision in the 1992 Constitution.

He explained that this provision gave Parliament powers to enact laws to promote and protect the rights of children; however, these proactive efforts led to the enactment of the Children’s Act, Act 560.

Mr. Boafo said in order to minimize the difficulties that orphans and vulnerable children went through, the government of Ghana introduced the National Social Protection Strategy Programme, which sought to enhance the capacity of the poor and vulnerable persons by assisting them to manage socio-economic risks.

The Coordinator, therefore, urged citizens who intend to establish orphanage homes, to desist from it and rather channel their resources into family-based care.

“You can identify poor orphans and vulnerable children around you, register them, assess their needs and give them support as they live with their families, instead of sending them to institutions,” he added. In a presentation, Rev. George Abaidoo, Coordinator of WWO, Ghana, said one of the biggest challenges facing the Christian Church today was the ever-increasing number of children growing up without the loving care of their parents, and without knowing their Heavenly Father.

Citing an example, he said, the number of adoptions by Ukraine was growing every year, hence there was a waiting list for Ukraine families wanting to adopt children under the age of seven, and most orphaned children were now being placed into families, instead of going to orphanages.

Rev. Abaidoo emphasized that the Church can easily spearhead the campaign of establishing the link between families and orphans in the society.

Rev. David Kwadwo Ofosuhene, Board Chairman of AGCI Ghana told the Ghana News Agency that the maiden event will be held annually, precisely the last week before the first Sunday in November.

He said the Orphan Week will be crowned with an Orphan Sunday on November 2; however, on Saturday there will be fun games at the Aburi Presbyterian Senior High.

Rev. Ofosuhene said among the objectives of the NGO were education support and missions.

As part of the ceremony, special prayers were offered for orphans and vulnerable children in society.