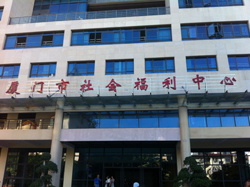 I woke up feeling so excited…..today was the day we would finally meet the children at the Xiamen orphanage!  After breakfast, we headed out for about a 20 minute drive to the Xiamen Social Welfare Institute.  We pulled up to a very nice I believe 13 story building that was home to many orphans and elderly people, about 5 of the floors I believe were dedicated to the elderly.  We were greeted by a woman named Lillian who spoke almost perfect English and she said she did all the paperwork for the children to be adopted at this orphanage.  We also were able to be greeted by several other staff and then finally the director.  We were taken up the elevator to a meeting room where we introduced ourselves and we went over the power point in Chinese with the staff.  I enjoyed telling the staff all about our agency and the China program and all the other programs and relief work we do around the world.  They loved hearing about all the special needs kids we have placed through our China program.

I was so impressed with how nice of facility this was, it was clean, organized,  and very well run.  It seemed like a night and day difference to the small remote village orphanage that we had visited yesterday.  The director was a women, dressed in a nice dress, and seemed  to take a lot of pride in the orphanage and seemed to really care about the kids there.  I asked about her back ground and she said that she had worked a lot in quality control work, and used to be a manager of a large hotel in Xiamen, and then started working at the orphanage, and worked her way up to assistant director, to now being the director.  I really enjoyed visiting with her.  She told us that the orphanage was well funded by the government. She said almost all the kids were special needs kids.  There are 350 kids there, but only 100 are place able due to the other kids being 13 and older and have aged out of the system. She said 6 of the kids are in college now, 2 in Fuzhou and 4 in Beijing.  The oldest in their care is a disabled young man, age 21, who I met later. He was very articulate but I believe had pretty significant cerebral palsy. We asked how we could serve them over the next year, and she said that the biggest way we could help them is to place kids from their orphanage.  She said that they have the resources to prepare all the paperwork if we can just work hard to place the kids.  I asked how we can help all the kids that have aged out of the system.  She said that there are three things: job opportunities, social life, and emotional affection. She said the older kids are ready to date too but do not have the social networking for it.  She said unfortunately it is the family that typically helps kids here socially, emotionally and even romantically, so she said all the teens really desire that.  She said whatever we can do to maybe help with that would be great, but again, that their greatest need is to place the kids. She said that she would also like to see a medical team come to help, and we would use this team to evaluate the kids to help with their placement and care.  She said that the caretaker ratio for special needs kids is about 1:2 and healthy kids are 1:4.  She said some of the kids are in foster care.  The kids attend a local school, and  the kids with special needs attend a special education class.

We then went for a tour of the orphanage.  The kids seemed to be very well cared for, it had an institution feel to it, which is what I was expecting, and things were simple, but clean and well cared for.  It was an air conditioned facility too so I was happy to see the kids comfortable.  We were able to observe all the age groups at the orphanage.  We observed a toddler play time, elementary school play time, lunch time for 3-5 year olds, the infant where most of the kids were labeled special care unit, and the top floor housed the older kids that were special needs kids that were unadoptable.  That floor was hard for me, I walked in to a room full of teenagers, many in New York blazers, with smiles on their faces, but with bodies that were crippled, many could not walk, and they were so excited I was there when they said I was from the United States, they asked if I was there to take them there and said they wanted to come back with me.  They were so kind and appeared well care for, but I could tell they would love a family.  They then brought in on that floor all the kids in wheelchairs, and asked me what these kids chances were of being adopted, right in front of the kids, their eyes were big looking at me for my response, culturally I needed to answer right there, so I responded that we would do our best.  The special care unit housed about 10 babies, almost all with special needs, like heart conditions, congenitally closed anus, downs syndrome, intestinal issues, and one little boy with water on his brain. They said they had other babies out in foster care with mild to moderate special needs. I really enjoyed some playtime with some of the toddler down syndrome little boys, they were precious!  There was a large amount of downs syndrome kids there, as well as children with cerebral palsy, and low IQ.  There were for sure kids I knew I could place, but some others that I knew would be more difficult.  I thought while I was there that one of the best ways we could help with these placements too is to help with the funding, so when I return to the office I think I would like to start up a scholarship fund for their placements this year.

After our tour we went to a lunch with the director, her main staff, and the director of the entire social welfare institute.  They wanted to do a toast to our partnership and they said they were so happy to have us here.  I told them about all of you, I told them that the families adopting from AGCI are exceptional and I know the kids will all be well cared for and loved.  Our contract with Xiamen will be for one year, and our goal will be to place as many kids from this orphanage as we can.  They then brought in each child in their care that was place able, except those that were in foster care, and I photographed them and met them in person, I believe it was close to 60 children.  AGCI will have their referrals alone over the next 12 months.  I am so excited to see what God will do!  I will look forward to seeing the paperwork done and submitted to the CCCWA hopefully soon. I am not able to post pictures of the kids publically, but here is a picture of the staff as well as a picture of the front of the orphanage.